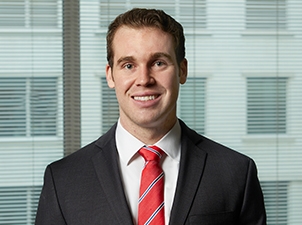 âI look forward to immersing myself in a given technology until I know it inside and out so I can best advise my client.â

Andrew C. Wood focuses his practice on patent and trademark litigation, legal opinions, and patent portfolio management. He has participated in multiple litigation matters in federal and circuit court, drafting briefs and oppositions and opinion letters, taking depositions, and assisting in all phases of pre-trial discovery and expert discovery.

Before joining Fitch Even, Andrew worked as an associate at a Midwest-based litigation defense law firm. While attending DePaul University College of Law, he served as a patent extern to the Honorable Amy St. Eve of the U.S. District Court for the Northern District of Illinois.

Andrew served as an integral member of the litigation team for the following matters:

Spire Inc. v. Cellular South, Inc. (S.D. Ala. 2017). Represented plaintiff/counter-defendant seeking a declaratory judgment of non-infringement and trademark invalidity. Assisted in drafting of opposition to a motion for a temporary restraining order that was denied. The parties reached a settlement and the case was dismissed with prejudice.

Member of litigation team that represented generic-side pharmaceutical manufacturer in ANDA/Hatch-Waxman litigation in the District of Delaware.

Currently representing past and present inmates of Illinois Department of Corrections in two pro bono matters before the Northern District of Illinois, where each inmate has alleged a separate civil rights violation taking place during incarceration. Drafted pleadings and motions, took depositions, argued in court, and drafted summary judgment briefing.