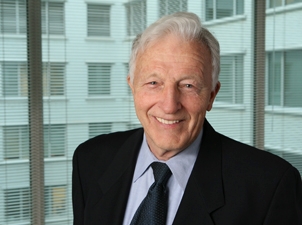 John F. Flannery focused his practice in intellectual property litigation for over 50 years. John joined the firm in 1957 while attending law school at and became a full-time associate in 1959 after earning his J.D. and passing the bar. He was made a name partner in 1981.

Among his many professional accomplishments, John obtained and enforced the original patent on the videotape recorder in October of 1960. This invention was a significant technological breakthrough that became a resounding success within the broadcast and professional community.

John was lead trial counsel in numerous major jury and bench trials, including Arrhythmia Research Technology v. Corazonix Corp., a landmark case before the Court of Appeals for the Federal Circuit that held software-based diagnostic systems were patentable.

He was also lead trial counsel in Rosemont Inc. v. Beckman Instruments, another landmark case before the Court of Appeals for the Federal Circuit. This case held that objective evidence, composed of real-world facts, is worthy of great weight in establishing validity of the patent.

In addition, John’s considerable expertise extended to patent prosecution, reissue, reexamination, interference, and other U.S. Patent and Trademark Office proceedings. He has provided counseling to clients in all areas of intellectual property procurement, enforcement, and strategy.

John is an elected Fellow of the American College of Trial Lawyers, which limits its membership to no more than 1% of the total lawyer population of any state and to only those experienced trial lawyers who have mastered the art of advocacy and whose professional careers have been marked by the highest standards of ethical conduct, professionalism, civility, and collegiality. John has been active in a number of additional professional organizations, including the Chicago Bar Association, who honored him for 50 years of service in 2011.

Represented plaintiffs or defendants in 15 appeals of decisions on patents or trademarks by District Courts to the Courts of Appeals in the Second, Fourth, Fifth, Sixth, Seventh, Ninth and Federal Circuits.

Represented plaintiffs or defendants in district courts throughout the country with respect to patents, trademarks, copyrights, contracts, and trade secrets. Most cases were settled prior to trial. Some of the cases that went to trial follow: