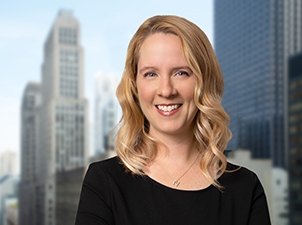 âI've always enjoyed working with others to solve complex problems, so the culture of collaboration at Fitch Even makes it a great fit.â

Nicole L. Little is a litigator representing clients in intellectual property law matters involving patents, trademarks and unfair competition, and trade secret law, as well as contractual disputes and business torts. Nikki is skilled in all phases of discovery, pretrial, and trial procedure as well as appellate practice before the U.S. Court of Appeals for the Federal Circuit. She has participated in numerous jury and bench trials, representing clients ranging from individual inventors to multinational corporations.

Nikki’s practice also extends to patent post-issuance proceedings at the USPTO, where she has represented clients both offensively and defensively in parallel with ongoing district court proceedings. She has also participated in cases involving the International Trade Commission. In addition, Nikki has considerable experience assisting clients with patentability, infringement, and validity opinions.

In addition, Nikki has experience in IP-related aspects of advertising, marketing, and promotions. Nikki has counseled clients regarding substantiation, approval, and defense of advertising and labeling claims, as well as legal compliance with federal and state requirements, including with respect to websites, email, social media, mobile, sweepstakes, and other marketing activities.

Nikki assists clients in negotiating a variety of agreements, such as ad agency, PR agency, sponsorship, joint promotion, partnership, software as a service, work-for-hire, non-disclosure, and master product and service agreements for a variety of areas. She also regularly advises on issues relating to data privacy and information security, confidentiality, and best practices for minimizing business risk in these areas.

Nikki serves as a member of Fitch Even's Executive Committee and the DE&I Committee and as chair of the Recruiting and Employment Committee.

Nikki is cofounder and past chair of Chicago Women in IP (ChiWIP), a networking and mentoring group committed to the connection, promotion, and success of professional Chicago women in all stages of practice of every facet of IP law.

Matlin et al. v. Spin Master Corp. (N.D. Ill. 2018–19). Serving as local counsel for defendant Spin Master against claims of breach of contract, fraud, and unjust enrichment. Has advised lead counsel on various aspects of the case, including in connection with successful motions to dismiss for lack of jurisdiction and for Rule 11 Sanctions against the plaintiff.

The Chamberlain Group, Inc. v. Techtronic Industries Co. (N.D. Ill. 2016–18). Served as local counsel for patent owner Chamberlain in its enforcement of a series of patents directed to various novel aspects of their garage door openers. Advised lead counsel on various aspects of the case, including in connection with a motion for preliminary injunction and other procedural issues. Also handled discovery disputes and defended several depositions in connection with the case. The case went to trial in August 2017 with a successful outcome for Chamberlain.

Outside the Box Innovations, LLC v. Travel Caddy, Inc. (Fed. Cir. 2012). Represented Travel Caddy in appeal from district court judgment of partial infringement, invalidity, and unenforceability of patents directed to tool-carrying bags. After assuming representation from another firm, our appellate trial team obtained reversal of both grounds of inequitable conduct, vacator of invalidity ruling, and affirmance of infringement ruling as to one product.