Fitch, Even, Tabin & Flannery LLP was proud to serve as a sponsor of the 40th Annual National Inventors Hall of Fame Induction Ceremony honoring the 2012 inductees. The induction ceremony took place in May at the Smithsonian American Art Museum and the National Portrait Gallery, the site of the historic Patent Office where the Hall of Fame’s first inductee, Thomas Edison, received his patents.

In attendance was Fitch Even partner Edward W. Gray, Jr., Chair of the National Inventors Hall of Fame Board of Directors, who assisted David Kappos, Under Secretary of Commerce for Intellectual Property and Director of the U.S. Patent and Trademark Office, in presenting the honors to the inductees. Also attending were Fitch Even partner Timothy E. Levstik and former partner Phillip Petti, now Chief IP Counsel at USG Corporation.

This year's honorees included, among others, Barbara Liskov, a pioneer in computer programming language design; C. Kumar N. Patel, inventor of the carbon dioxide laser, widely used in many industries and by the military; and Gary Starkweather, inventor of the laser printer. Steve Jobs, one of three people inducted posthumously, was recognized for his notable influence on personal computing, digital publishing, film animation, and innovative consumer products. The complete list of 2012 honorees can be found on the Invent Now website.

The National Inventors Hall of Fame, a subsidiary of Invent Now, is a nonprofit organization established in 1973 in partnership between the National Council of Intellectual Property Law Associations and the U.S. Patent and Trademark Office. The Hall of Fame honors individuals holding U.S. patents whose extraordinary innovations and creations have made significant contributions to our nation’s welfare and to the advancement of science and the useful arts. The Hall of Fame currently has 470 esteemed members. 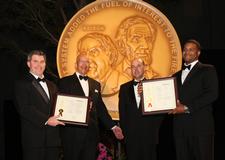 In the photo above taken at the induction ceremony, Ed Gray and David Kappos are flanked by the Patent Examiners who dealt with the patents of two of the inductees. Scott Baderman, pictured far left, handled the Barbara Liskov patent, and Marlon Fletcher, far right, handled the Steve Jobs patent.


In the photo above, David Kappos congratulates inductee Akira Endo, recognized for developing mevastatin, after he receives his medallion, while Ed Gray looks on.