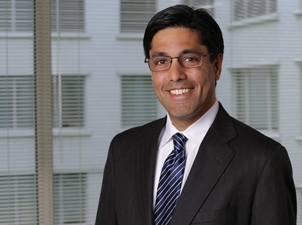 âMy greatest reward comes from working closely with our clientsâ inventors and key decision makers to identify and protect the significant commercial features of their inventions.â

Stephen S. Favakeh is a patent attorney with over 25 years of experience counseling clients in the development of their worldwide intellectual property assets. Steve concentrates on the strategic procurement and enforcement of patent and trademark rights in the United States and abroad, with a special focus on Japanese clients.

Steve has extensive experience in preparing and prosecuting patent applications that have resulted in strong patents respected by competitors. To achieve this, Steve recognizes the importance of gaining a comprehensive understanding of the background and purpose of each invention developed by his clients, including the technical challenges that were overcome leading to their innovative breakthroughs. He has a proven record of success with prosecution matters that are extremely difficult to get allowed. Steve’s clients credit his ability to provide an in-depth description of the novel features of their inventions while still maximizing the scope of the claims in their patents.

Clients also turn to Steve for his opinions on avoiding infringement of competitors' patents. Highly analytical and a careful listener, he is integrally involved with the engineers and scientists at the companies he represents, working with them as a team to develop innovative technical solutions for avoiding exposure to infringement liability.

Steve represents U.S. and foreign clients in diverse technologies, including vehicle restraint systems, industrial conveyor equipment, consumer products, and medical devices. He advises clients on their intellectual property portfolios, licensing programs, and activities and has reviewed and written numerous licenses relating to the transfer of intellectual property rights. In merger and acquisition transactions, Steve handles sophisticated due diligence investigations involving comprehensive studies of patent portfolios and the analysis of all the intellectual property matters raised in the related contracts to these transactions.

Steve regularly gives presentations in Japan and elsewhere on new patent laws and regulations proposed for adoption in the U.S. He is a member of Fitch Even's Executive Committee, Business Development Committee, and the DE&I Committee.

Has represented independent inventor/entrepreneur Michael A. Waters and Waters Industries since 1996.

Represents Flexible Steel Lacing Company, a midsized global manufacturer of a diverse range of products for the conveyor belt industry. Have successfully obtained patents for substantially all new product developments over the last 20 years. This company is a market leader in their industry, and the strength of their patent portfolio plays a significant role in maintaining this status.

A Chicago-area travel accessories manufacturer wanted new representation for their intellectual property and was referred to Steve by a corporate attorney who worked with another Fitch Even client and had observed our ability to obtain strong, commercially significant patent protection for that client. The manufacturer selected Fitch Even over the largest patent boutique in Chicago based on the recommendation and our presentation. Due to the strength of our patent prosecution work, the company decided to engage Fitch Even for their litigation matters as well, including an appeal before the Federal Circuit.

Represents Takata Corporation, one of the largest global manufacturers and suppliers of automotive safety systems based in Japan. Because of the high quality of Steveâs patent prosecution work, Takata engaged Fitch Even to expand our services to include their opinion and litigation work.

Took over difficult prosecution for compact keyboard invention of independent inventor because previous counsel was unable to gain allowance of the patent application. Inventor considers patents the key to securing capital from angel investors that he is seeking to commercialize his invention.

Participated in competition for patent prosecution for leading global communications technology company Motorola. The company had traditionally prepared and prosecuted all patent applications in house, but was turning to an outsourcing model for this work. Each of the many firms vying for the work was judged on quality of the test patent applications they prepared. Wrote and/or supervised preparation of all the test applications, and on the strength of their quality, Fitch Even was one of the firms selected to be an approved supplier for their outside patent application work.

Fitch Even has represented Pioneer Surgical Technology, a leading innovator in the design and manufacture of medical implants and instruments, for over 10 years. During that time, the company has experienced significant growth due to its new product offerings that are in large part covered by patents written and prosecuted by Fitch Even. As a trial, Pioneer had initially transferred a problem prosecution matter to Fitch Even from another firm, which culminated in the successful acquisition of several patents.

In addition to application work, Fitch Even does opinion and litigation work for Pioneer. In one significant opinion matter for which Steve was responsible, the non-infringement position he formulated was eventually upheld on appeal by the Federal Circuit.