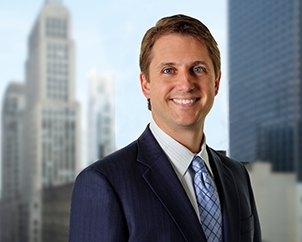 Iâve found patent applications tend to move forward more efficiently when attorneys look at them from the examinerâs perspective, keeping in mind thereâs a real person behind the process.

IllinoisU.S. Patent and Trademark OfficeU.S. District Court for the Northern District of Illinois

Clients turn to Nicholas T. Peters for sophisticated patent portfolio management and the prosecution of complex patents. He helps clients manage patent assets with strategies tailored to their needs, including when and where to file patent applications, how to write them, and how to usher them through the patent offices.

In addition, Nick has extensive experience in “atypical” practices at the U.S. Patent and Trademark Office (USPTO), including reissues, reexaminations, post-grant procedures, and oral argument before the appeal board.

Nick credits his previous litigation experience in helping his clients manage risk and stay on the right side of IP claims. As a result of his perspective, Nick can guide his clients to make more-informed decisions regarding any patent risk and how to mitigate that risk. This includes attacking third-party patents through various means, such as at the USPTO, where Nick regularly meets with examiners, creating relationships that can help move challenging cases through the USPTO.

Before attending law school, Nick worked with the Living State Physics Research Group at Vanderbilt University. There he helped design and run a type of electromagnetic field detector called a Superconducting Quantum Interference Device (SQuID). This work was published in Science magazine and in Review of Scientific Instruments and mentioned in major news sources. It also led to Nick being named a co-inventor on U.S. Patent Number 7,002,341.

Nick is a member of Fitch Even's Executive Committee.

Assists prominent university in monetizing its research through development of intellectual property.