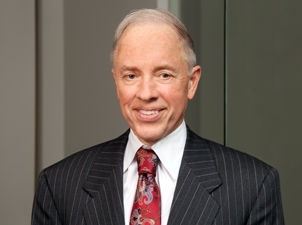 âI pride myself in applying the lessons I've learned in successfully running a patent licensing company and serving on public company boards to helping clients achieve business goals through their patent portfolios.â

Donald E. Stout’s intellectual property law practice spans over 40 years and encompasses experience in nearly all facets of patent law, including patent prosecution, IP portfolio management, licensing, and litigation. He has written and prosecuted hundreds of patent applications in diverse technologies, rendered opinions on patent infringement and validity, and testified as an expert witness regarding the procurement and prosecution of patents. Don’s clients look to him to provide his unique perspective and counsel on strategic planning for monetization of patents.

Many of the clients Don has worked with have been large global corporations in industries that include telecommunications, electrical power generation, semi-conductor technologies, computer software and hardware, and mechanical engineering. In addition, Don founded a highly successful licensing company where he was solely responsible for patenting its technology involving wireless email. He has also been a member of the board of directors for three publicly traded companies all involved in the licensing of patents.

Prior to joining Fitch Even, Don was a senior partner with an Arlington, Virginia-based IP law boutique for 33 years. Before earning his law degree, he spent four years as an assistant patent examiner at the U.S. Patent and Trial Office, where he focused on patent applications covering radio and television technologies.

Cofounded a patent licensing company with its principal inventor to license wireless email technology. Wrote and prosecuted all of the patents in the companyâs portfolio and provided strategic planning regarding the companyâs licensing program. The portfolio was widely licensed in the telecommunications industry and realized royalties of over $700 million over the life of its patents.

Represented FastShip Inc. in prosecuting and developing its patent portfolio. Provided strategic advice regarding the licensing of the sea frame of the United States Navyâs LCS 1 and 3 littoral combat ships. Currently serves as co-counsel in FastShip, LLC v. United States (Fed. Cl. 2013), seeking compensation on behalf of plaintiff for infringement of FastShipâs patents by the U.S. government in the design and building of the LCS 1 and 3 combat ships.